(Rotterdam 1954) worked over the past 40 years on an extensive body of work. The main theme in his paintings are ‘Museum interiors’.

Willem van Veldhuizens paintings are generally painted in a fixed composition. A view from inside a space to the outside. The upper part of the canvas shows a wall or glass window through which a garden or an urban landscape is visible. The foreground shows a large floor area. The reality of the buildings, nature or the outside world is reflected in the floors. The upper part of the canvas is painted with a high degree of precision while the lower part of the canvas is generally painted in a more loose manner. Besides painting, Van Veldhuizen is proficient in drawing from life, model drawing. His works are in various private and museum collections. There are also several monographs published. The work of Willem van Veldhuizen is characterised by the reproduction of an almost unreal empty space, often a museum interior, of which a large part is the floor with a view to the exterior. The reality existing beyond the window is reflected on the gleaming floor. Van Veldhuizen often places elements in the space, such as sculptures or furniture. The interior, the objects and the outside space form a coherent composition that is painted very realistically technically, yet results in a surrealistic picture. Most of his works are unpopulated; the spatial feeling is realised through light, reflection and shadow. 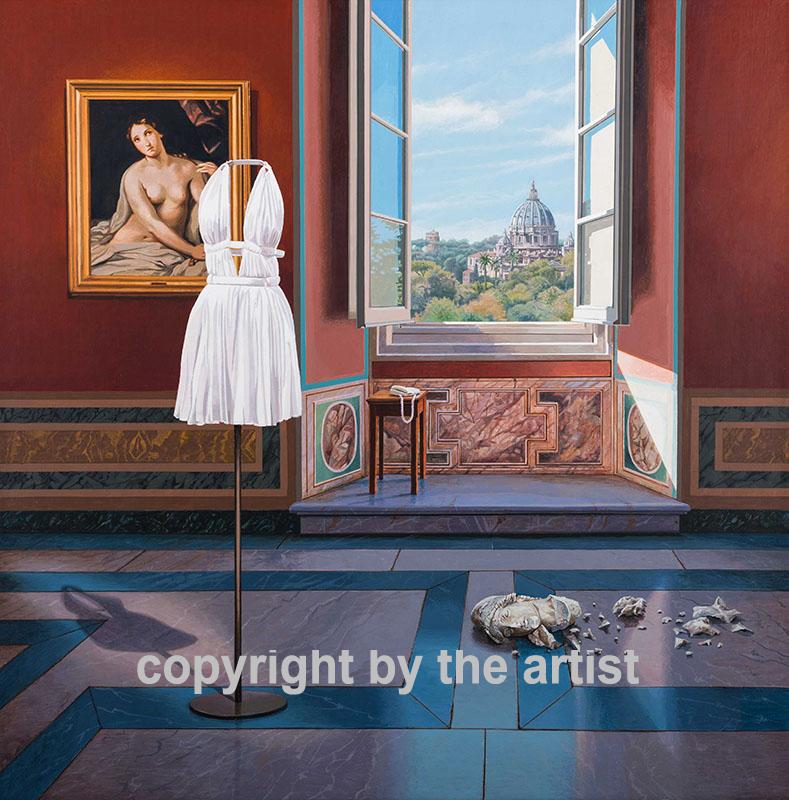 ‘It might sound strange, but the first time I experienced a tremendous shock of recognition, I was at a commemoration exhibition of Mark Rothko (1903 – 1970). Even-though my work did not develop in the direction of this kind of abstract expressionism, still it was Rothko’s work that gave me the impulse to go my own way. I saw that it was possible to decide on my own manner in the art of painting’. What struck Willem van Veldhuizen in Rothko’s work was the search for balance on a flat surface, the appeal of a large colored area as well as the vibration of colors on such a large canvas. In his paintings, this fascination is translated in large floor areas of museum interiors. Museums provide Willem with the right kind of rooms: they are prestigious and attentive to architecture while at the same time subservient to accommodate art. It is not that he literally copies the rooms, but by choosing a different composition he creates fictional spaces and alters the view to complement and intensify the image. By visiting various modern museums, he is offered the motive for a new painting. ‘When I’m standing in such a room, I’m impressed by the atmosphere, the peace, the coolness of it all, it strikes me emotionally. I put out my feelers as I wonder how I can shape these emotions. As it takes form in my head, the process of translating an emotional concept into a rational solution begins. The attraction towards the subject is purely emotional. The translation into a painting however is a rational process.’

In general Van Veldhuizen’s paintings are composed according to an established pattern. The upper, narrow part of the canvas shows the back-wall or a glass wall through which a garden is visible. A large floor area holds a prominent place. The reality of the building or the world outside is reflected in the floors. The back part is painted with great precision; this is also the first part to be completed. Then the artist builds up the floor area according to a special technique which he has made his own. After the undercoat has been applied and the shadows have been put in, he ‘splats’ the paint against the canvas: color over color, layer on top of layer – making subtle distinctions in light and dark against the back-wall. (Parts that should not be splut, are covered with tape.) Van Veldhuizen uses this technique in such a way that the paint splats onto the canvas in elliptical drops. This is highly important to create the perspective effect. (During the final strokes, the tiles become visible). Finally the artist applies approximately 40 layers of glaze onto the floor area to create this typical glossy three dimensional effect. Discipline and great technical skills are required for the kind of paintings that Van Veldhuizen makes. Because of this method, it takes up to 3 or 4 months to finish a painting. Van Veldhuizen mastered this technique by self-tuition. Furthermore he submitted the paintings of Peter Blake, one of England’s best-known pop art artists, to a profound study. According to Van Veldhuizen, Peter Blake displays a fabulous technique. Influences of classical- and classic-modern masters (beside Rothko) can be recognized in his work in various ways. He relates to Saenredam with his preference for sacred rooms, tranquility and colors in harmonizing tones. In his museum interiors, Van Veldhuizen quotes with pleasure his favorites in art, among others Michelangelo, Picasso, Man Ray, Newman, Rietveld and Le Corbusier. In his early work, the colors are kept restraint by putting various light tones in delicate distinctions in order to achieve a balance in beauty and tranquility. His recent work is characterized by a more expressive use of color although the color is still subsidiary to the form. Also the interior itself contains less details. Still the balance between the inside and outside world holds the key to Van Veldhuizen’s paintings.

1954 Born in Rotterdam, The Netherlands.

Bronze medal Europe prize for Painting
Karelklinkenberg prize for the Art of Drawing
Royal Subsidy for Painting.
Stipendium Rotterdam Art Council
Gold Medal of Honour as a member of the advisoryboard of the Al Thani Award for Photography